Tungum tubing has been used in the restoration of seven flying aircraft with Hawker Restorations Limited. Aircraft is restored requiring original manufacture.

At the end of her military service the Hawker Hurricane G-HHII was refurbished to ‘as new’ condition and then sold off to the private sector, as were most surviving RCAF Hurricanes at that time. Many became much needed ‘hardware stores’ donating their parts to keep the tractors and machinery running on the many enormous farms of the Canadian prairie. This aircraft was lucky and remained substantially intact, to be re-discovered in Canada in the 1990’s as a very complete airframe with most major components intact. Returning to the UK, Hawker Restorations Limited began the restoration work in 2005. The comprehensive restoration was completed in January 2009. Her first flight took place from North Weald on 27 January 2009.

How Tungum played its part

The Civil Aviation Authority requires items to be made as the original manufacture of aircraft in and during World War II and Tungum is used on the hydraulic systems of the aircraft.  Tungum is an ideal material for this type of application.  Its high strength to weight ratio made it a material of choice at the time.  Fatigue resistance is another important feature of Tungum as there is a large amount of vibration that hard piping systems have to endure on early aircraft such as the Hurricane.

Tungum tubing is performing well with no reported problems on the restoration. Positive feedback was also received on how easy the tube is to work with and assemble.  Hawker Restoration Limited has used Tungum on seven previous restoration projects. 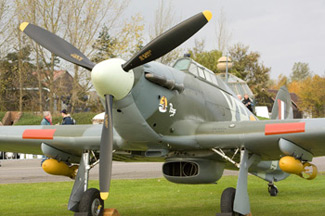