HMS Chiddingfold is a hunt-class mine countermeasure vessel (MCMV) in active service in the British Royal Navy.

She was launched in October 1983 by her sponsor, Lady Anne Kennon, and formally entered the service of the Royal Navy in October 1984. HMS Chiddingfold is a minehunter, hence her purpose is to find and destroy mines, not only in a time of war but also in peacetime. There are about a quarter of a million mines still active from the Second World War alone and they pose a major threat to both military and civilian ships.

HMS Chiddingfold is able to enter some types of minefields without the mines detonating. This is because she is made of Glass-reinforced plastic (GRP) and all fixtures within the ship are made of non-ferrous metals, keeping the ship’s magnetic signature to the bare minimum.

Tungum tubing has been fitted to the main hydraulics system with an operating pressure in the region of 180 Bar.

The Tungum tube fitted has been in service for over 35 years. Tungum tubing is performing well with no reported problem.   It was only changed out due to modifications to other areas and not as a result of defective pipe work. 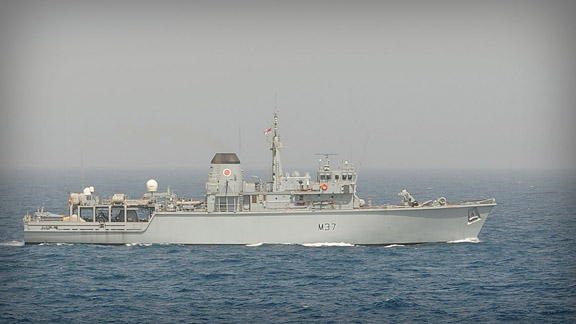